I'm proud to announce SqueakJS, a new Squeak VM that runs on Javascript:

It was inspired by Dan's JSqueak/Potato VM for Java, and similarly only runs the old Squeak 2.2 mini.image for now. But I developed it inside the Lively Kernel, which allowed me to make a nice UI to look inside the VM (in addition to all the Lively tools):

It represents regular Squeak objects as Javascript objects with direct object references. SmallIntegers are represented as Javascript numbers, there is no need for tagging. Instance variables and indexable fields are held in a single array named "pointers". Word and byte binary objects store their data in arrays named "bytes" or "words". CompiledMethod instances have both "pointers" and "bytes". Float instances are not stored as two words as in Squeak, but have a single "float" property that stores the actual number (and the words are generated on-the-fly when needed).

For garbage collection, I came up with a hybrid scheme: the bulk of the work is delegated to the Javascript garbage collector. Only in relatively rare circumstances is a "manual" garbage collection needed. This hybrid GC is a semi-space GC with an old space and a new space. Old space is a linked list of objects, but newly allocated objects are not added to the list, yet. Therefore, unreferenced new objects will be automatically garbage-collected by Javascript. This is like Squeak's incremental GC, which only looks at objects in new space. The full GC is a regular mark-and-sweep: it's marking all reachable objects (old and new), then unmarked old objects get removed (a very cheap operation in a linked list), and new objects (identified by their missing link) are added to the old-space list. One nice feature of this scheme is that its implementation does not need weak references, which Javascript currently does not support.

This scheme also trivially supports object enumeration (Squeak's nextObject/nextInstance primitives): If the object is old, the next object is just the next link in the list. Otherwise, if there are new objects (newSpaceCount > 0) a GC is performed, which creates the next object link. But if newSpaceCount is 0, then this was the last object, and we're done.

The UI for now copies the Squeak display bitmap pixel-by-pixel to a typed array and shows it on the HTML 2D canvas using putImageData(). Clipboard copying injects a synthetic CMD-C keyboard event into the VM, then runs the interpreter until it has executed the clipboard primitive in response, then answers that string. This is because the web browser only allows clipboard access inside the copy/paste event handlers. You can drag an image file from your disk into the browser window to load it.

Besides running it on your desktop, you can install it as offline web app on an iPad: 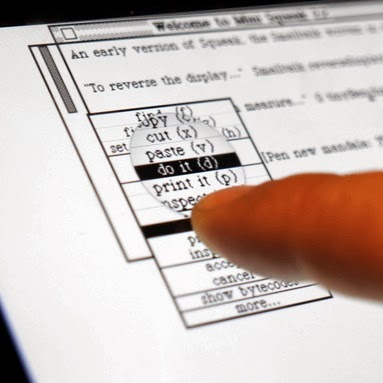 On the iPad there is neither right-click nor command keys, but the menu is available on the inside of the flop-out scrollbars. It needs a fairly recent browser, too - it works in iOS 7, but apparently not in older ones. On Android it works in Chrome 31, but not quite as well (for example, the onscreen-keyboard does not come up on an Galaxy Note tablet).

Go to the project page to try it yourself. The sources are on GitHub, and contributions are very welcome.

Have a great Christmas!